Now, if you frequent Twitter about 2 times a year, don't hang out on reddit and email nobody but your 5 close friends, you're probably not going to get 100k emails in 7 days.

Because, let's face it, those who managed to do that had an online presence and connections. They had a network to leverage.

But they would never have been able to get so many emails, if they hadn't gone viral.

Would be nice if you could do that, eh?

You might not get 100k emails. You might get just 2k, but that's still a good start.

Part 1: The recipe for a viral landing page

If you're thinking that anyone would want to stay on your landing page to learn how your software works, you're on the wrong track.

I don't mean to be rude. Just to warn you.

So, instead of "The most innovative way to X. Enter your email. [Sign up]", try this:

Sidenote: Bonus points for you, if you can make your promise actually unique–offer something your competetitors aren't offering or something they offer but aren't talking about.

To learn more about writing headlines, subheadlines and the basic structure of a landing page, take the free copywriting course here.

The goal of your landing page is to make people take action right now. They won't come back. You can't guarantee.

The easiest way to make them take action is to offer something in exchange.

This something is called an "incentive".

The incentive could be anything that your potential users want.

For example, you could give away free beta access or use a downloadable file as an incentive (a lead magnet).

And here's how this looks in real life:

The viral loop is really simple:

You make people refer their friends (share a link) and give them in exchange something more than what you promised initially.

So, a viral loop is comprised of these:

Sidenote: Why do referrals work so well?

You can't guarantee your visitors will come back. So, you can't afford to let them leave without taking action.

The incentive is one way to make them act now, but these persuasion devices can amplify the effect of the incentive.

The sense of being privileged, of being allowed to access the inner circle.

But adding exclusivity isn't just about saying "Enter your email. Get Free access"

Here's an example of a beta landing page that has nothing exclusive about it:

Access isn't restricted. You can get it if you just enter your email.

And here's an example of a landing page that does create a sense of joining an exclusive club:

Note the wording: You have to request access to free closed beta. You need an invitation.

What is in limited supply is usually in high demand.

Scarcity takes advantage of our FOMO (Fear Of Missing Out 3).

If we really want something but are wondering about buying it or signing up for it, the fact that it soon will be unavailable can push us over the edge.

You're employing urgency when you say that something is available for a limited time.

It is SO powerful that it works every time, on, dare I say, everyone (me included, I admit).

To take advantage of urgency, you have to use a short period of time. Otherwise, your offer won't feel urgent. People won't feel pressed to act now.

How many supermarket promotions last 4 months?

If you were to use all 3 on your landing page, you'd say something like this:

300 people will be able to use the full premium features of AppX for free during our beta testing period. Sign up before MM/DD/YY to be one of them.

Let's take a look at a few real-life examples of viral landing pages that were successful.

How Happyfox Chat got 1000 beta signups in 2 weeks

HappyFox Chat is a new live chat solution for startups and ecommerce stores.

They are offering free beta access for up to 10 agents.

They are promising that you can get access sooner by referring a few of your friends.

Truth be told, I would've liked to know how many friends I have to refer. Having an an exact goal would be more motivating.

Edit: They actually told me that I needed to refer 7 friends in the email I received later.

A perfect viral page is worth nothing if nobody gets infected. :)

They report that Betalist converted best for them at a whopping 35% rate.

How they built the viral loop

At first HappyFox Chat used KickOffLabs to build their viral loop, but they had some additional requirements that KickOffLabs didn't satisfy. So, they built their own referral engine and used customer.io to send emails based on behavior.

You can read the full story by director of marketing at HappyFox Mani Karthik here 4.

How Harry's got 100k email signups in a week

Harry's is a new shaving brand that focuses on delivering the highest quality blades together with an ergonomic handle.

Their incentive here is exclusive access. The exclusive feel of their landing page is enforced by the key icon and the call to action name "Step Inside". You get that it has something to do with razor blades but you don't know what and your curiosity makes you want to "Step Inside". They created a sense of exclusivity. Well played. :)

Since this is a physical product, they couldn't possibly give people "earlier access" because that wouldn't make a lot of sense. Instead, they offered additional products as gifts. These were their incentive upgrades. I really like the progress bar here.

The fundamental mechanic of our campaign was a game: complete the challenge of referring friends and earn prizes.

Harry's leveraged their network in the best possible way.

The rest is the magic of the viral loop.

How they built the viral loop

Harry's used their custom built website for their launch campaign.

The original post by Jeff from the Harry's team can be found the Four Hour Work Week Blog 6.

Tools to create your own viral loop

And you can easily create incentives with this tool:

About the author Gergana Dimova

I use my non-magical persuasion methods to help small business owners, digital agencies, entrepreneurs and consultants get more leads and sales. You can learn more about working with me here. 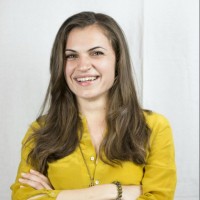 Gerry Dimova
Hi! I'm Gerry, a conversion-focused marketing copywriter. I use my non-magical persuasion methods to help small business owners, digital agencies, entrepreneurs and consultants get more leads and sales. Here's how to connect with me:

Other Ways To Connect With Me